With the Rocky Mountain snowpack being minimal at best over the past few years the window of opportunity for Alberta creeking has been short and often disappointing. Again this year looked bleak with a snowpack which came and went out the backdoor. However since the beginning of June, a gift of torrential rain has been sent from afar from the Gulf of Mexico. In a matter of days arid Alberta was saturated coastal style and washed away are paddler's concerns of an unfulfilled season. With the gauges blowing past normal on local waterways, it is time to welcome back quality creeking to the Eastern slopes of the Rockies and get things done. 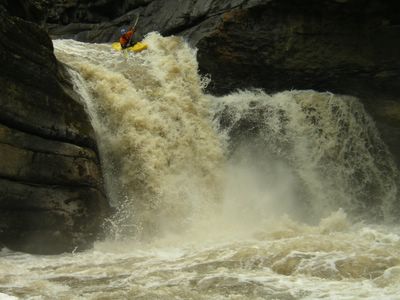 Hoping for a soft landing and some friendly boils off of Titan - Cataract Creek, Alberta.

Cataract Creek is one of Southern Alberta's great local wilderness runs with good access and some quality drops found within. At the start you meander along an open creekbed for 5km until the valley narrows to the meeting of 2 mountain ridges. Just past a blind corner, the river constricts into a narrow box canyon. Here you will want to either scout or portage the two big canyon drops on river right. The one-two combo of Hercules and Titan falls is classic descent, however Hercules usually doesn't have a clean line until higher water. Titan can be ran at much lower flows by seal launching below Hercules. 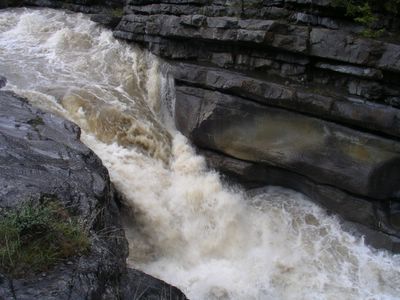 Shown with a clean line (14cms), Hercules marks the entrance to the first box canyon with Titan falls just below.

After exiting the first set of waterfalls, the creek runs through another canyon of class III rapids until Zig-Zag falls. Zig-Zag begins as a series of river-wide ledges before a 10 foot boof into another walled-out pool. 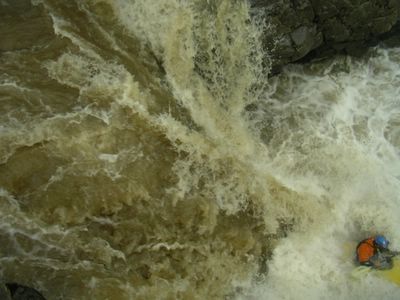 Touchdown off of Zig-Zag falls.

Another 4-5km of class III+ and the river kicks right and ramps off into the Nasty-Notch, a narrow river-wide chute with walls on either side. 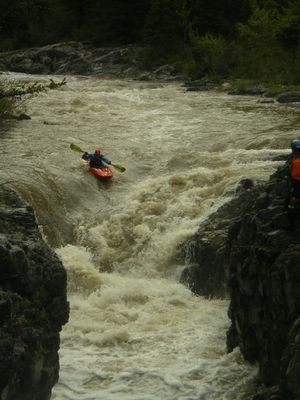 The final push to the confluence with the Highwood river contains many more bedrock ledges and perhaps one of the largest rapids in Alberta. Class V Leviathan cascades over 3 large ledges before turning into a 50 ft. two-tiered slide and finally dropping into a massive hole. Even if you have run everything up until this point, most people take a really long look at this rapid before opting to portage on river left.

To get to Cataract Creek, head West on route 541 from the town of Longview following the Highwood river for 40km until you come to Sentinel recreation area. Here marks the confluence of Cataract creek and the takeout for the run. To reach the put-in, continue up route 541 for another 4km and then turn left onto the 940 forestry road and head south for 12 km until you reach the bridge. Good camping and an alternative put-in exist just beyond here. 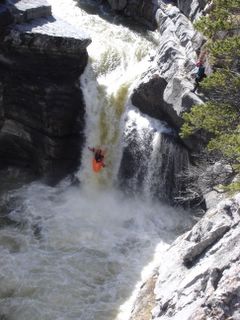 Back to Titan for an October huck - Cataract Creek, AB