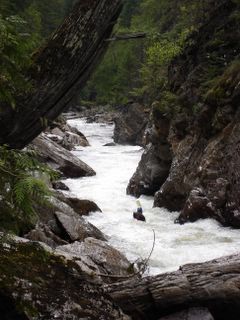 4 hours into... and now quite amongst it. Raft River, BC - Canada

Although it has a name that sounds inviting to those seeking rubber tubes and raging water, the Raft River is one of those deceiving BC runs that probably won't see a raft descent for a very long while. In fact, whoever it was that decided to first attempt the Raft's lower box canyon successfully must have been having a fearless paddling year and adventurous thoughts. 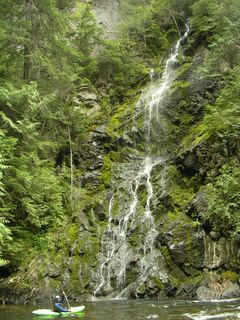 BC water at its finest.

I actually first heard talk of the ominous Raft being ran (probably for 2nd or 3rd time) from un-BC-local Clay Wright while I was paddling in the Southeastern US during the Spring of 2001. Although he couldn't quite remember the name of the run which he and some friends had stumbled upon during a late summer roam through BC, the fact that it was "Near the Clearwater River, DEEP and.... VERY SWEET", left me quite intrigued and wanting to investigate. The next summer during my annual round of BC creeking, I discovered what Clay was describing as I dropped deep into the final kilometers of the Raft River gorge. 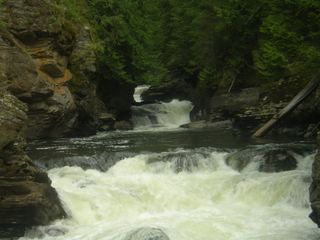 The final few drops on the run before Raft Falls.

3 years came and went however, before I was back again paddling that first stretch of the river trying to describe what was about to be upon myself and Jordie McKenzie, my only willing paddling companion. Although the Raft meanders lazily from the headwaters near Wells-Gray Provincial Park, the final push to the confluence with the North Thompson is through 4-5 km of tight technical drops in very inescapable and intimidating surroundings. 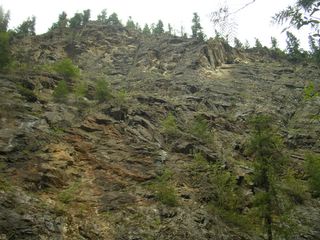 The secret of running the Raft's canyon requires a crucial assement of the river's flow. Don't even consider this run in early summer or after big rains. The river does pass underneath the Yellowhead Highway where you can get a quick glance, but it is better to turn onto the Raft River Forestry Road and walk up to Raft Falls past the sawmill next to the river. A quick path through the sawmill and down to the river will reveal a local swimming and cliff-diving hangout with a 20ft waterfall. Raft Falls should look runnable and have an adequate amount of water in comparison with the wide, calm and shallow water that continues just downstream. Running the waterfall is your only ticket out of the gorge and will mark the end of an amazing creeking experience should you decide to put on. 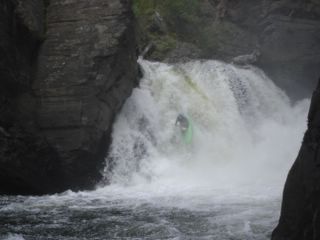 A sweet huck off Raft Falls to finish it may seem anticlimatic after 5km of box-canyon head games.

From the sawmill, the forestry road climbs steeply up along the river right shore. Around km 14, another forestry road will fork off to the right and quickly cross the Raft River where it will be flowing calm and flat. Put in at this point and you will need to paddle 3-4 kms of flatwater before the river steepens and the canyon begins to form. You will know when you've reached the crux of the run once the river starts to drop through some ultra narrow and difficult slot drops. One of these rapids is VERY questionable because if the water is too high it does not have any eddies to catch above. It also has nowhere to set safety and requires a high cliff jump into the pool beyond it. As we found out, we were staring around at the canyon walls for a very long time trying to make a good decision. However, with patience and plenty of adrenaline boofs later we came to the end of it all. 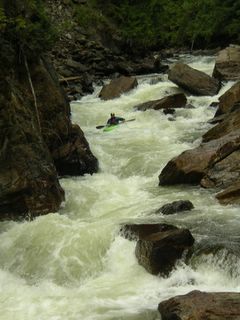 Jordie McKenzie now fully desensitized to the task at hand.

The Raft River well represents class V creeking in an intimating yet beautiful environment commonly found in the Britsh Columbia wild. Although the canyon is short, it certainly will leave you with something to tell others about even if you do happen to forget the name of it. The run is located less than 10 km east of the town of Clearwater BC heading towards Jasper. 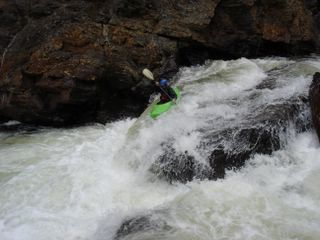