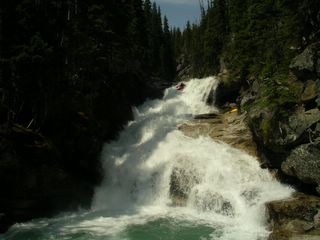 Jordie McKenzie drops a backcountry bomb on the North Stein River, BC - Canada

Since the beginning of backcountry river exploration in BC, the few paddlers who ever got to run the entire length of the Stein Wilderness had to do so by getting a solid group into Stein Lake headwaters with the assistance of their wallets and the Whistler Air Service. This all changed however in 2003 when David Norell, Braden Fandrich and Corey Boux first attempted to access the Stein River Valley with only their boats, a map, sleeping bags and plenty of ambition. 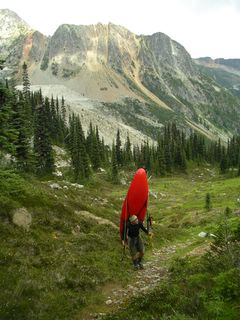 After coming out from the mosquito abundant bush days later their infamous journey quickly turned into a much talked about adventure among their paddling friends in Western Canada. Their story about the trip was later published in a paddling magazine and the tales of the cheap dirtbag route became a classic and inspiring river story for anyone looking for a new BC multi-day mission. Best of all, not only did the trio of core-boaters save themselves more than a grand in plane fare, they discovered that the mandatory access tributary happened to drop 1800 feet over endless runnable slides in the last mile and a half. It was this discovery now known to a few more including myself as the very special North Stein River. Of course no tale on paper really can describe just how much hell is sometimes needed to find that piece of heaven you're searching for. 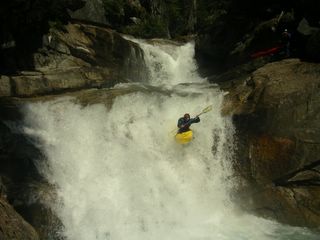 Chip Powell eats up the gradient on the final mile of the North Stein.

After 5 weeks of twice a-day creeking with fellow wingman Jordie "two boats-a-month" McKenzie, we ran into Braden Fandrich and quizzed him on our logistics of heading into the North Stein a week later. With our plans and route confirmed, I returned to Calgary to grab back-yaks, more beer and the unemployed and always smiling Chippy Powell as a third leg also keen for some vacation from hell training. 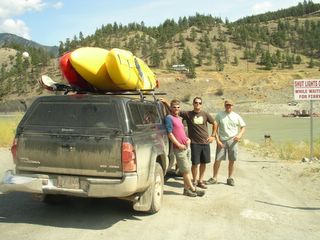 Just two Alberta dirtbags and an immigrant who can't afford a floatplane.

Once back at the Stein River take-out our adventure began with an afternoon drive out of the arid Fraser River Canyon and into a much cooler Coast Mountain Range. Pavement became dirt which became rock and overgrown trees on dirt track. Eventually the road came to an obvious end at 6000 feet with still plenty of elevation needing to be gained on foot. With majestic peaks surrounding us the enormity of the task of carrying nearly 100 pounds further into the unknown began to take effect. Just as final words of uncertainty were being uttered from our gracious shuttle driver Jenny, she watched her man Jordie take an epic nosedive down a steep slope out of view as we departed with loaded kayaks and the rest of the week’s adventure on our shoulders. 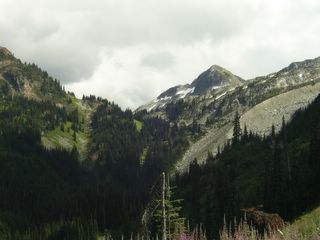 She's just over them there hills.....

Nearly three hours later we camped near the highest point of our climb and shivered the night away hoping tomorrow would be easier on our body and mind. The following day we walked through beautiful open meadows while constantly swatting the mosquitoes buzzing our heads. As a finale to our journey on foot we dropped down a steep wooded slope while chasing our boats into a maze of overgrowth and snags until the water appeared and rejuvenated our hopes. The North Stein at this point was still very far from being a river and the drysuits both Chip and Jordie were wearing began to be quite useful as our trio began hopping over numerous logjams on into the day. 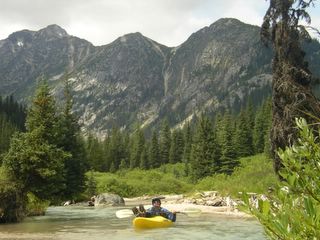 All business after 6 hours of hiking.

Nearing the point where we thought more hell was being dished out than the amount of heaven we could ever receive, a treasure of gradient and big drops was found. We camped in the canyon only three drops into what would follow as one of the steepest river running days of our paddling lives. The morning of day 3 we crawled from our bivys and headed directly into what we had traveled so far to discover.

By the end of it all we had portaged only four times and ran more than a dozen slides and drops one would expect to find in the Sierras of California. The heaven meter had finally surpassed the hell. 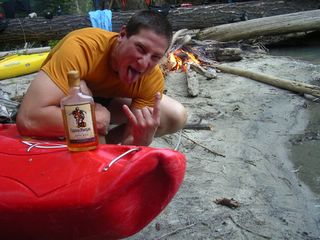