In July 2013 an international team consisting of Benjamin Hjort (NOR), Mariann Saether (NOR), Ron Fisher (CH), Mark Basso (CAN), Xaver Freiser (DE) and Jasper Polak (NED) made their way to the Altai region well inside the great federation of Russia. For all of us it was that biggest part of the world we had never been to.

Compromising a large portion part of our livable planet in a far off land and once considered an enemy of the western world, there is no doubt even thinking about a trip here meant preparation and tolerance for a big paddling adventure well off the beaten path.

How big? Well saying your going kayaking in Russia is like telling someone you are going kayaking to North America. However, just like North America Russia has many mountainous regions and it was specifically in southern Siberia along the Kazakh, Chinese and Mongolian borders the remote and mountainous region of Altai is found. In Altai, classic whitewater rivers such as the Argut, Chulyshman and Bashkaus begin as wet grasslands and gentle meandering streams before cutting themselves through deep gorges on their way to form the great Ob river of central Russia. 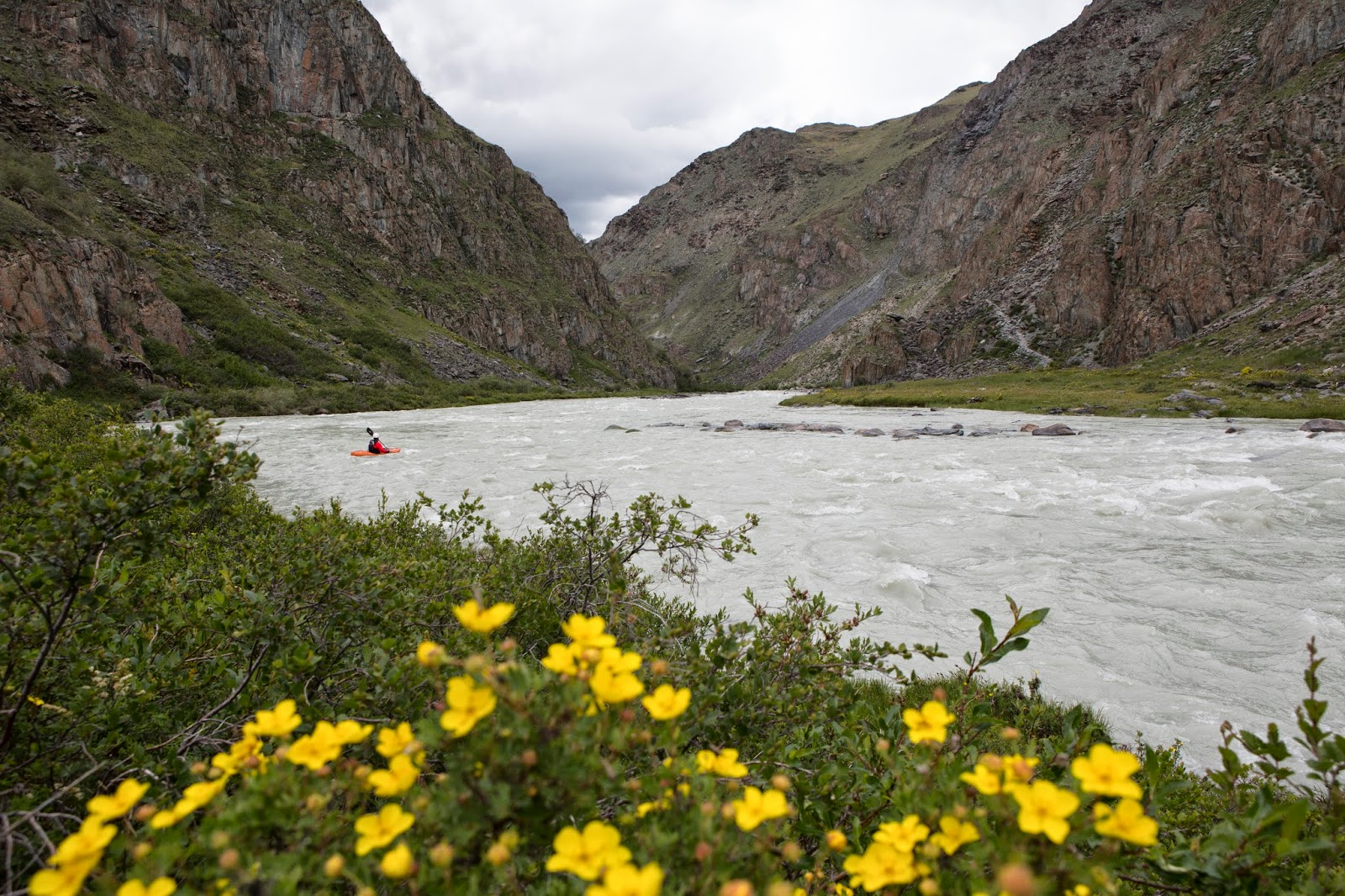 Those thinking a remote region in Russia might be full of unexplored first descents might be disappointed to discover that although the hard shell whitewater kayak is still a relatively new craft in this part of the world, many hearty Russian river explorers have been attempting to tame the raging rivers of Altai for quite some time. Since the 1970’s and 80’s Russians have been making incredible descents of raging class V and VI whitewater by means of raft, cataraft and of course the oddly designed Russian Bublik.

Legendary descents of these rivers were known to take several weeks and have included stories of incredible hike-ins, arduous portages, primitive gear repairs as well as unfortunate swims and tragic endings. Memorial plaques are found alongside some of these rivers hardest rapids and pay homage to the passionate wild adventure seeking that Russian whitewater enthusiasts have had since long before kayakers came.

Flights from around Europe via Moscow connected us all as we met in the city of Barnaul Siberia well groggy from the all-nighter airplane flights.  We rounded ourselves up in a well ridden toyota van and soon after we were on our way adjusting to different food, Russian language and interesting cultural habits. 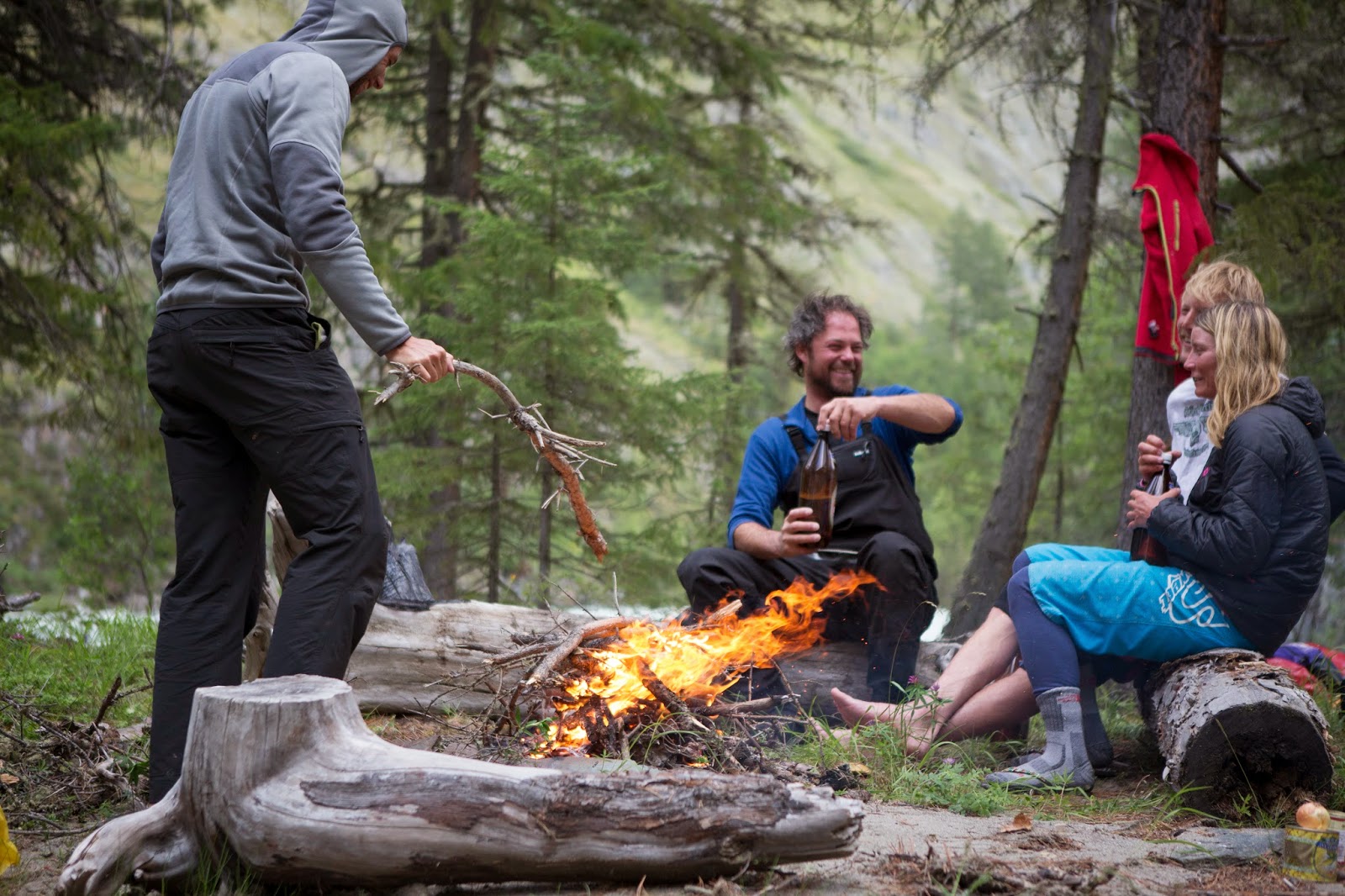 The sun was out and the sights were beautiful as we enjoyed plenty of smiles and laughs with our new guide Vasily Prosev. At first we knew little about our new found friend, but over the next five weeks we were able to discover his incredible capabilities as class V kayaker, off road driver, river guide and highly creative van mechanic.
Our pattern of travel took us first to the Sumulta river valley where we got our first dose of Russian 4wd off roading with Vasily at the helm. At the point the primitive road we were hammering up finally disappeared completely, we warmed up on a stress free hike into a remote and lush valley and soaked in the views. The next 2 days of the Sumulta were spent on easy class IV before the river grew in volume and the last kilometers gave us some big class V moves as we joined the great Katun river valley.

After this warm up we headed to the Chuya river and the infamous Mazhoy gorge. Vasily was all smiles in his kayak now and kept up a fast pace as he took the lead on this short class V day run section. Although the Mazhoy was certainly pumping and a few beatdowns were witnessed, we were only getting a taste of things to come.  With more rain on the horizon we would be returning to this spot a few weeks later to a whole new river level and experience that would be called the ‘King of Asia’ race.

Next up for our group was the great Bashkaus river canyon and the book of legends journey. Heading up over a pass from the Chuya river valley was only a quick drive and by the same afternoon we had acquired supplies for the 3 day trip and were floating down into the great abyss that so many Russians considered to be the most challenging river section in Altai.

By the next morning the walls of the canyon towered above us as the Bashkaus gradient began to steepen significantly creating long complex rapids and putting us to shore often for scouts and portages.

The Bashkaus book of legends memorial appears high up on the cliff at one of the biggest rapids that long ago claimed the lives of many Russian rafters attempting to pass through. The book itself serves as a tribute to lost lives here and beyond as well as those of us who are making river journeys like this across the world. After a long stop to read some passages from the book and reflect on our journey to this amazing place, we got back into the folds of the abyss paddling at our best through endless class V whitewater. Eventually the river eased and we camped one last night before a fairly straight forward paddle on day 3 to the confluence of the Bashkaus with the Chulyshman and our waiting shuttle beers.

From here our journey continued for 3 more weeks of expedition kayaking on more classic Russian test pieces including the Ak-alakah and mighty Argut. Never was there a dull moment except for a few extra van repairs and some over salty meals that often came in the form of beans, rice and soup bases. Altai became a journey that any paddler who seeks remote adventure into the utmost reaches of our great planet deserves fully. I will never forget this paddling trip with such good friends and meeting the challenges this adventure brought along the way.

A video from our trip by Benjamin Hjort